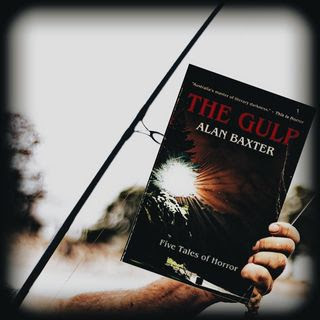 SYNOPSIS: Strange things happen in The Gulp. The residents have grown used to it. The isolated Australian harbour town of Gulpepper is not like other places. Some maps don’t even show it. And only outsiders use the full name. Everyone who lives there calls it The Gulp. The place has a habit of swallowing people.

A truck driver thinks the stories about The Gulp are made up to scare him. Until he gets there. Teenage siblings try to cover up the death of their mother, but their plans go drastically awry. A rock band invites four backpackers to a party at their house, where things get dangerously out of hand. A young man loses a drug shipment and his boss gives him 48 hours to make good on his mistake. Under the blinking eye of the old lighthouse, a rock fisher makes the strangest catch of his life.

Five novellas. Five descents into darkness. Welcome to The Gulp, where nothing is as it seems.

Welcome to The Gulp, the Hotel California of Aussie harbor towns.

Out on a Rim

Two truck drivers get stuck in The Gulp. One decides to wander the town and finds more adventure than he bargained for.

Mother dies. She wasn’t a very good mom and the teens decide to keep her death a secret. Then they find mom covered in a fungus...and it's hungry.

The Band Plays On

A new spin on an old trope. Four young adults find happiness in music, partying with a band after a show, but when weird stuff begins to happen, Patrick can’t believe he is the only sane one.

If a crime boss gave you 48 hours to come up with an obscene amount of money, how would you get it? Dace has a very simple way--steal, but when the couple he is robbing turns out to be more than he bargained for, Dace is forced to decide whose life is worth losing. (Hint: it isn’t his family’s)

Alan saved the best for last. This creepy tale gives us life, literally. A sinister egg is found by a fisherman and things begin to change for all of The Gulp.

“The Gulp has a habit of swallowing people. But sometimes it spits one out.”

And just like that, The Gulp has spit me out. I survived. I enjoyed my stay, everything cleaned up very nicely in the end and the ending gives us home to a return trip. I would definitely visit The Gulp again.

Alan gave us five distinct stories, some more brutal than others (seriously what is up with the guinea pigs?), but all high in creep factor.  There is certainly a weird force around The Gulp and it leads us all to one thing-- the fall.

Thank you to Alan Baxter for a gifted copy of THE GULP in exchange for an honest review.

at 10.3.21 No comments:
Email ThisBlogThis!Share to TwitterShare to FacebookShare to Pinterest
Labels: Review
Older Posts Home