The Only Good Indians 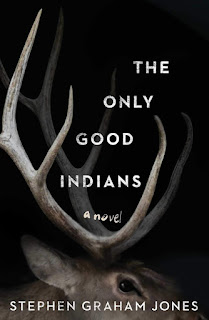 Title: The Only Good Indians
Author: Stephen Graham Jones
Publisher: Saga Press
Synopsis: Seamlessly blending classic horror and a dramatic narrative with sharp social commentary, The Only Good Indians follows four American Indian men after a disturbing event from their youth puts them in a desperate struggle for their lives. Tracked by an entity bent on revenge, these childhood friends are helpless as the culture and traditions they left behind catch up to them in a violent, vengeful way.
Release Date: July 14, 2020

"What'd they use in the old days, wood? Horn? A bladder? The skullcap of a wolverine, because the old days were metal as hell?
Real, witty, creative, and representation!
The Only Good Indians is a modern Native American legendesque story about a group of guys that have done some super uncool stuff to the animal kind. We first follow Lewis through is dive into madness as the spirit of an elk calf h(a)unts him. We then travel back to the reservation where the other friends, Gabriel and Cass (Ricky has already died), are forced to face their past transgressions.

I loved the Native aspect to this story. One of my favorite creatures is a wendigo, so I have a special love for Native lore. I feel Stephen Graham Jones captured the culture well with only a few stereotypes (alcoholism) and a strong female character (Denorah).

I just wish the Elk Head Woman had a cooler name. It reminds me of the time my then 8 year old son named his fictitious superhero Tuna Fish Man.


Thank you Saga Press and NetGalley for gifting me a DRC of The Only Good Indians in exchange for an honest review.
at 27.6.20
Email ThisBlogThis!Share to TwitterShare to FacebookShare to Pinterest
Labels: Review