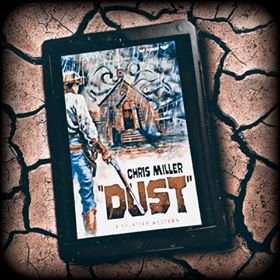 Title: Dust | Third in the Splatter Western series from Death's Head Press
Author: Chris Miller
Publisher: Death's Head Press
Synopsis: 1879: An unknown and timeless evil descends on East Texas. John Dee, bestowed with knowledge from beyond, moves through time and space, pursuing age-old horrors and ending their reign. As he seeks the hidden town of Dust to continue his lifework, another is hot on his heels, and will stop at nothing to rip the divine knowledge from Dee.
As these opposing forces collide, Dee becomes both hero and villain in his quest against the Elders. He doesn't have time to be sorry - THERE ARE GODS TO KILL.
Rating: ⭐⭐⭐⭐

“Naw, suh. You don’t tell a man something like that and not show him what you speaking of. I may be three-fifths a man, but you five-fifths out your damn mind you think you ain’t about to show me what you talking about.”

Third installment of the stand alone Splatter Western series by Death's Head Press, Dust, takes us on a fast, gory ride to 1879. The Civil War is still fresh in everyone's mind. Selling body parts off Black people is profitable. And James Dee is on a mission from the future.


East Texas, where it is hot and the only past-times are shooting stuff and drinking piss colored beer. We are welcomed by the brutal violence of James Dee, a pure heart, but not a good man, and his quest to destroy an ancient evil in the hidden town of Dust. He has worked seven years to get to this spot and he isn't taking shit from anyone that gets in his way.


Gear Dreary is there to get in his way. But he has to find Dust first. Only a little old lady holds the secret to finding the town, home to the marker of N'yea'thuul. As much as James wants to destroy the evil, Gear wants to harness it. What unfolds is a true western shoot out of good vs evil.


I was most pleased by the pace and gore level of this book. It satisfied all my bloody needs and never had a dull moment. It is told in multiple point of views so some events overlap depending on that person's actions.  Some might find that confusing, but I feel it adds to the atmosphere of the story. James is definitely not our hero, even though his goal is to save the world. He seems to do the right thing, but typically does it in a manner most would frown upon.


What I didn't like and it bothered me the duration of the story, was Denarius and his ability to assume his family was "fine" after white men kidnap him and without any consideration, accompanies James to Dust. Like really dude? You don't think you should at least be like "hey wife, I'm alive thanks to this guy and I need to help him stop the apocalypse"? Write her a note? Something? No? Ok, rude.

at 14.8.20
Email ThisBlogThis!Share to TwitterShare to FacebookShare to Pinterest
Labels: Review