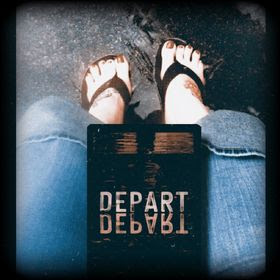 Title: Depart, Depart
Author: Sim Kern
Synopsis:  When an unprecedented hurricane devastates the city of Houston, Noah Mishner finds shelter in the Dallas Mavericks' basketball arena. Though he finds community among other queer refugees, Noah fears his trans and Jewish identities put him at risk with certain capital-T Texans. His fears take form when he starts seeing visions of his great-grandfather Abe, who fled Nazi Germany as a boy. As the climate crisis intensifies and conditions in the shelter deteriorate, Abe's ghost grows more powerful. Ultimately, Noah must decide whether he can trust his ancestor ⁠- and whether he's willing to sacrifice his identity and community in order to survive.
Depart, Depart! grapples with intersections of social justice and climate change, asking readers to consider how they'll react when the world changes in an instant. Who will we turn to? What will we take with us, and what will we have to leave behind? In our rapidly changing world, these are questions we grapple with. Focusing on finding and supporting community after disaster, Depart, Depart! is a story for these uncertain times.
Publisher:  Stelliform Press
Rating: ⭐⭐⭐⭐
"Depart, depart quickly!"
Yes! Finally I have found an LGBT+ story that isn't about romance. I have longed for an interesting story that has a wide range of characters on the queer spectrum without it being about their love interest.

A hurricane destroys Texas (which is happening right now 😬) and Noah is spared only because of a mysterious, ghost-like materialization of his great-grandfather as a child. Abe is a Jewish child that survived the holocaust by being hidden in a duffel bag and boarding a ship.

After being rescued, Noah finds himself a piece of normalcy in small group of queers in a popped up shelter in a sport's arena. This group finds comfort in each other, but others in the arena become more and more aggressive. Abe helps Noah navigate his courage and survive the insanity with his newly made family.

This novella is a great start to an awesome story. At times things didn't transition well or could have used more descriptive language, but the plot is solid and Noah's character development is building toward an amazing character.

The last quarter of the book was much more fast paced and I enjoyed it most. It's a very short amount of space to fill with so much knowledge and I could see it being structured as a full length novel. After that ending, I really hope this isn't it for Sim Kern!