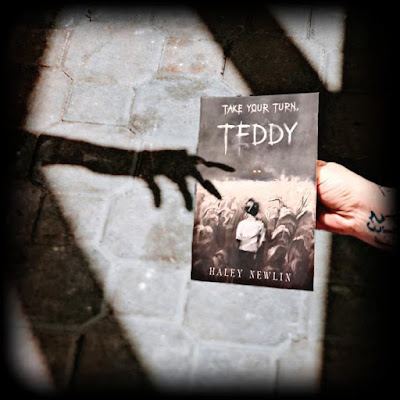 TITLE: Take Your Turn, Teddy
AUTHOR: Haley Newlin
SYNOPSIS: No one knows your darkness like your own Shadow.
Nothing has been normal for Teddy, not since discovering the harsh identity of the monster he had been living with his whole life—his own father. Teddy and his mother leave that behind to start over in a small Indiana township. But as Teddy begins to learn of humanity's monsters, he unveils an otherworldly evil he calls "The Shadow." The Shadow tests Teddy's vulnerability and growing sense of isolation, poisoning his mind and conjuring a vile killer-in-the-making.
A year later, Officer Leonard Strode is called in to offer consultation on a case similar to the most brutal and scarring of those he’s worked on before. One is the case of Jackie Warren, the other, Theodore “Teddy” Blackwood — two missing children. As he and two other officers follow the trail of clues, Strode is haunted by the ghosts of his own past and is horrified to find them wreaking havoc on his present.
When both Teddy and Strode finally meet face-to-face, they must confront their inner darkness as well or else be consumed by it.
PUBLISHER: New Degree Press
RATING:★★★★
Whoa, TEDDY!? WTF, broski. This novel was a pirouette of crumbs that lead us through five parts. First, we are introduced to Teddy and his parents. That doesn’t end well and Teddy relocates to Indiana. Now I live in Indiana, I have never seen anything weird and mysterious but it always seems weird shit is happening here in spooky stories (Sam and Dean spend a lot of time in Indiana too).
Once Teddy moves into his grandparent’s old house, the weird factor is kicked up a notch. Teddy, lonely, angry Teddy, meets a friend in the basement. Enter SHADOW. Without giving too many details, Shadow and Teddy embark on a bloody adventure for the next year.
Overall, I loved the story, the characters felt nuanced and balanced, and there were no questions left unanswered. I will note that once the police characters my enjoyment fell a bit and that is merely personal preference (I am so over cop/military characters rn) and as the story progressed, I appreciated their POV.  Finch, a WOC and a police officer in the 70s was a great choice here! I felt her persistence and attention to detail are what made the investigative part of the story more interesting.
Part five felt a bit rushed and I would have read another 20 pages if it could have been drawn out more.
For Newlin’s great storytelling, diverse characters, and unique twist on imaginary friends, I gave TAKE YOUR TURN, TEDDY 4 stars!

Thank you, Haley Newlin and New Degree Press for gifting me an ARC of TAKE YOUR TURN, TEDDY in exchange for an honest review.
at 8.3.21
Email ThisBlogThis!Share to TwitterShare to FacebookShare to Pinterest
Labels: Review